Traveling the east coast is by far the trickiest! It’s the first time we have had to book well in advance for places, and after 8 months on the road, making it up as we go, we are lacking the skills necessary to do this well.

We planned to skimp on the next four days accommodation as we couldn’t get into Rainbow beach Caravan Park until then. We contemplated Hervey Bay, but most parks were booked out and some travelers had suggested it was like a retirement village. Uncertain of what to do, we thought maybe some fishing on the Mary River? I found a (rare) low cost camp on wiki that was still going to cost almost $40 a night!
At the last minute, we changed our mind and thought fishing in Tin Can Bay would be a much nicer option! So that’s where we went!

The caravan park I found cost less then the ( not so cheap) camp on the Mary River and it had a pool, spacious sites and wifi!

We were greeted by our neighbor opposite us, our first pensioner pest!!!! We can honestly say nearly every person we’ve met along the way so far have been so nice and friendly! This guy was openly a wingeing old bastard who bailed us up only to tell us he annoys people because his bored! He awkwardly bagged his wife, he told my polite, happy children what to do and he couldn’t take a hint to save himself!

For the first two days we felt like prisoners in our van. The moment he spotted us outside he began approaching us! In the end Pon had to stand there giving the awkward silent treatment to him and the deal was done! That was until the day we were leaving and he felt the need to tell us which way to pull out of our site. Of course it was a much harder way and required an unnecessary 5 point turn, instead of one clean sweep if we had of turned left ( our intended way) but because Pon likes to run for Australian of the year nominations quite regularly and we had old mate watching our departure we turned right and proceeded to awkwardly drive forward and back (mr bean style) numerous times to exit the site!! It was kinda funny remembering back.

We managed to get lots of exercise in. The foreshore of Tin Can Bay was quite nice, the kids rode their bikes and Pon and I ran along side them until we hit the first park. Then again to the skate park then again to the exercise park! The kids enjoyed joining in on the fun and it was a great way for us to escape the retirement village we holidayed in.

Down fall. The midges! The lady at reception told me they didn’t get them when I asked her upon checking in, but the nomads that stay for months at a time tell me the midges will pick you up and carry you away!! I was their newest target and copped a beating! should I blog about the length of time I spent itching? I’m starting to understand why they call it Tin Can Bay!!!
That’s all your left with after using up all your bushmans aerogaurd spray, ointment and lotions to stop or soothe the bites!!! 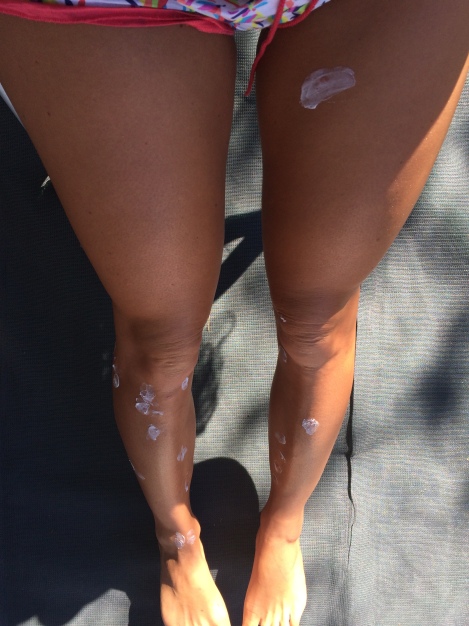 Tending to my midge bites

The best part was when we put the boat in one day.
Of course we were intending on catching dozens of fish but what we experienced was well worth the effort and made up for the lack of action on the rods!
We came across dolphins that are commonly fed in Tin Can Bay that approached our tiny boat and slowly glided beside us.
We saw dugongs feeding on the sea bed and occasionally surface as if they were checking us out! We also saw turtles which popped up occasionally! We were all buzzing from the multiple encounters we had had that we didn’t seem to even worry about how bad the fishing had been. We were happy to call it a day. 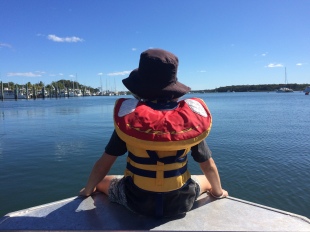 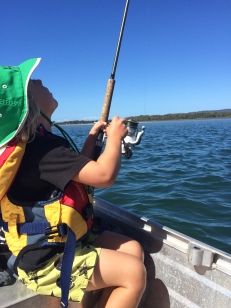 We took a drive into Hervey Bay one day to explore the touristy town. It was completely buzzing with people being a weekend.
We found a good coffee place and settled in for a picnic in the sun on the beautiful but very tidal beach. It’s a shame we saw it at dead low tide as I could see the potential postcard Beauty Hervey Bay would offer.
The kids played at the park and then we came across a Sunday market.
I found a few bits worth snapping up whilst the kids jumped away on the jumping castle and ate snow cones.

Hervey Bay was much bigger than we then we expected it to be.. Actually it’s quite huge when you factor in the shops, the fast food places and major shopping centers. 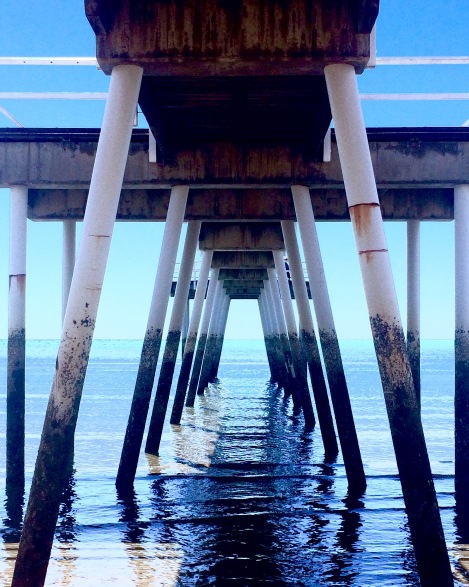 Looking forward to moving on to Rainbow Beach. I suppose our time feels precious now our trip is nearing the end. Let’s hope we catch more then midge bites next time!