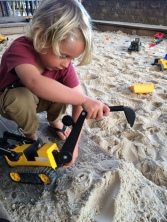 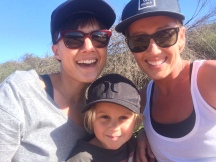 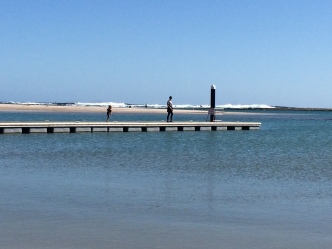 Reunion wrestles
We flew into Perth about Midday after yet again a blissful flight. The plane was somewhat less crowded so we could spread ourselves over two 3 -seaters which made the journey home that bit more comfortable.

The temperature was a brisk 14 degrees upon landing. We sure didn’t miss feeling the cold!
We set up back at Karrinyup waters in preparations for our visitors!! Our excitement levels were high!!!

Nix had slight ear pain that afternoon from the flight, I dosed him up on Panadol and practiced a few equalizing techniques to try and relieve the pressure I ‘assumed’ he was suffering from ( I give the kids a lollipop on take off and landing to help them pop their ears but Nix chewed his up a tad to quick and felt a strange pop on landing ) Thankfully after half an hour or so things went back to normal and he was in fine form to wait for his uncle Chris and Mils to arrive that night!

About 12:15am, my phone rang.. They finally arrived!!! They caught the dreaded ‘red eye’ plane over from Sydney. I jumped out of bed and walked up to the gates of Karrinyup to meet them! It was the best feeling to see their sillouetts walking towards me. I felt like jumping out of my skin!

We sat up chatting briefly, the kids woke up in excitement to see them quickly before we all dozed back off to sleep.
We made sure the kids refrained from bursting into their tent early, as we wanted to allow them a slight sleep in, but before we knew it it was uncle Chris who instigates the all in brawl wrestle sessions of affection, to greet the kids and start the day!!

We did so much talking and couldn’t wipe the smiles off our faces! The kids were smitten! Mils was looking so sharp with her new set of Bangs! They probably redefined our bogan caravan look we had running, Chris and Mils looked so fresh and manicured with silky smooth hair and soft moisturized skin. The kids hair was tinged green from the chlorine and was stiff and matted from our salty showers in Bali. I’m sure mine looked just the same, if not worse! Pons beard was grown out with bits of grey and we run the same clothes for minimum two days straight. We looked like Crusty old sea dogs, with dry, leathery, old, sun-damaged skin. We’ve let the kids hair grow out and their fingernails are possibly filled with dirt. But hey. Chris and Mils loved us all the same.

We took off after a big breakfast to Scarborough for a coffee at Yelo cafe. Really yummy coffee with an awesome view. Afterwards we drove down to Freo for some op shopping, before treating ourselves to another little creatures brewery session… it never fails you! Mussels all round with quality beer flowing while the catchup continues in the fine company of Chris and Mils. It was such a fun arvo. We topped it off with a few games of jenga, uno and some Captain Morgan’s ( topped with coriander) in the Van.

The next couple of days we travelled north. We stopped at Lancelin to try out the sand boarding. It was surprisingly busy out there with crazy dune buggies and motorbikes zooming around you. It looked like so much fun! The sun was out, but the moment you reach Lancelin.. The wind instantly becomes much stronger. In this case a howling westerly. As we approached the dunes the sand was whipping you across the legs and peppering your face. We got the kids up to the top of the dunes only to slide down on their bodyboards with their eyes squeezed shut. They were in tears by the bottom as they had to spit a mouth full of stand out of their little mouths. The spit blew back on themselves and more sand blew into it embeds itself, revealing a sand beard. So picture a crying, squinting child with a circle of sand encrusted around its mouth, almost dancing up and down to escape the lashing of sand whipping across the legs!!! We were out of here!

We hit the road again, next stop was the dessert pinnacles.
What an amazing sight! Thousands of limestone rocks sticking up out of the ground in the middle of a vast , flat and sandy dessert. It’s quite unbelievable and was so worth a stop! The kids and Chris played hide and go seek. I honestly thought that would be the last time I saw them again! It was almost impossible to pick which rock they hid behind!
We were in a barrel of laughs over the ideas and variations on selfies we saw from all the tourists.
The best one by far was Chris wrapped around a penis pinnacle!

We arrived at a place called Dongara.
We set up just in time for the most amazing sunset we’ve ever witnessed! As the sun went down the clouds illuminated into the brightest and most vibrant pinks, purples and oranges! The boys even stopped mid soccer game to admire it! Hands down the most amazing sky I’ve ever seen!

The next day we trucked on to reach Kalbarri. We stopped in at Geraldton for a coffee which Was a 8.9 rating on the bean hunter app! Holy shitballs! It was perfection in a cup! So good that Chris purchased $50 worth of beans for the road! ‘The quiet time’ I think it was called. The kids played at a futuristic, mega park with all the bells and whistles before Chris and Mills surprised the kids with a trip to the movies to watch the new a ninja turtles movie. The boys were beside themselves! We did a quick swap of the car seats and Pon and I left them all behind to get a head start on the set up in Kalbarri while they stayed on in Geraldton for the movie.
Pon and I didn’t know what to do with ourselves.. Here we were, driving on north without the kids in the back seat! It felt bazzar after 5 months, without a days separation! We appreciated the peace and quiet and zero rotations I had, of requests coming from the back seat.
There’s not a whole lot in between Geraldton and Kalbarri. Lots of flat vibrant green grass and rolling hills. We saw a beautiful pink lake and some old convict ruins. I’m happy with a rusty old windmill sometimes! This landscape is just so different to the east coast and we’re loving the adventure of traveling amongst it all.

We no sooner set up camp arrived at Kalbarri and the weather turned yucky. It was a good move get the head start as we made it just in time. The rain was set in.
The following day we drove around and saw the coastal cliffs. It was a nice Morning even in the wind.. The views were incredible and so unlike any coastline we’ve seen before. It’s very much like the sunburnt country I imagined and looking much more dessert like up here.
Mills and I treated ourselves to an op shop, venturing forward empty handed to the one and only expensive boutique in Kalbarri. We scored! We walked out with hundreds of dollars worth of savings! $20 nobody jeans ( original retail price was well above $200) and a few other little bits we were stoked on.
We met up with the boys at the skate park before returning back home for dinner.. and drinks of course!

Day 2 In Kalbarri- Mils and I took Raff for a big ride whilst we ran behind. The boys took the boat out in the Murchanson River, we later caught up with them on the jetty and Mills hoped in for a turn! They came back with Chris all chuffed to have caught the one and only Bream which he was very happy with. We tried for some some bream off the jetty later that afternoon, but they were just a tad undersized. The sun was shining and the warmer weather was upon us.

Chris and Mils are always so loved up and smitten! They said they enjoyed being smuggled into the two man tent we set up for them in the annex. Though I don’t think they will ever plan to have children anytime soon, after the four nights of broken sleep we all endured!
The site we were allocated, backed up onto a family holidaying in a tent. They had two small kids that woke almost every two hours immediately elevating into a screaming cry for either water, a cuddle or something else the parents refused them off. This would go on until the kids erupted into a croupe like coughing fit of hysteria every single time. The first couple of nights I felt sympathetic to the family, refraining myself from offering Panadol or assistance. Assuming they had came unprepared as their children became ill.
After two consecutive nights of broken sleep I found myself wanting to shout out…. “Just give him some f@&king water!!!!” Before listening to the parents count up to three and belt the kids for not going back to sleep. ( those poor children didn’t ask to go camping in winter whilst they were sick! And if they wanted a drink of water in the middle of a coughing attack… Give the poor sick kid a drink you cruel parents!) this went on every night we were at Kalbarri and Chris and Mils were unlucky enough to have felt like they were almost in the same tent at times. The only down fall to Kalbarri!

We ventured out to the national park which was an amazing little adventure. We looked through natures window and checked out the z bend gorge. It was too beautiful for words.
We spent afternoons sometimes with a cheese platter, a frisbee and some drinks watching the western ocean sunsets! Often a wrestle was involved between the boys and their uncle Chris!
Mills even relieved me from a school session with Nix which they Both seemed to enjoy.

The very last night we went out to a local favorite. A BYO Finleys fish BBQ.
We rocked up to what seemed like a low key backyard in the middle of an industrial estate, there were multiple fire pits burning and plenty of tables to choose from. You have a black board menu with only local seafood caught fresh from the surrounding areas and your choice of salads from the salad bar. There was also sign up saying play for your meal! No talent would be left unheard! Such a nice vibe and so typically Aussie.
It was great! We topped off the night with toasted marshmallows for dessert before calling it a day and ending a truly epic reunion. 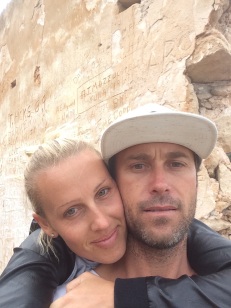 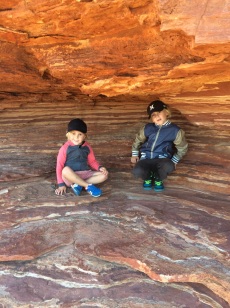